Change is in a hurry on Four Seasons Lane.

Thousands of pounds of excavation and terrain grading equipment have parked at the Landover-Sharmel neighborhood hamlet. At the base of the hill at Northeast 18th Street, construction crews mow, till and flatten land as they prepare to build a neighborhood of new housing.

Soon there will be 430 new houses there. Ground was just broken two weeks ago, and construction crews will spend the next year laying water and sewer pipes and other infrastructure.

With a project of that scale, developers and real estate experts believe the project could alleviate pressure that has built up in the housing market. Meanwhile, businesses stand to gain from added foot traffic, while nearby Evergreen schools prepare for crowded enrollment.

Patrick Ginn, a local real estate broker-turned-developer, is leading the project. He hopes it will help the area, too, by paving the way for more residential and commercial growth in the Northeast 18th Street corridor.

A native of Sebastopol, Calif., Ginn moved to Clark County in 2000. He started studying finance at Clark College and finished his degree at Golden Gate University in San Francisco. He received his master’s degree from the University of Oregon.

After years of selling real estate with Lake Oswego, Ore.-based Hasson Company Realtors, he started buying land relatively recently, subdividing and selling the plots. He hasn’t left real estate, but this yearslong project consumes much of his time.

“Frankly, it is hard work,” the 36-year-old said, before adding that he’s sleeping fine. He said he’s energized by the community because “I know there is a need for this. I think this corridor is fantastic.” The area is convenient to Interstate 205, Vancouver Mall, Portland International Airport and big employers such as SEH America.

Ginn wouldn’t disclose the expected costs to develop the 430 single-family homes, which will each contain between 1,500 to 1,800 square feet. He and a silent partner have spent $9 million on purchasing, permitting and engineering, he said.

The first homes are expected to be completed at the end of 2018. They will sell for $250,000 to $300,000 — a price that Ginn and other real estate professionals call “affordable” after housing costs swelled in the Vancouver-Portland metropolitan area. The median housing price in Clark County was $334,800 in July, according to real estate listing service RMLS.

Terry Wollam, managing broker for ReMax Equity Group in Vancouver, said the many houses coming on line should find a lot of demand.

“That’s a lot of homes,” Wollam said. “There’s demand throughout Clark County; it’s not in one specific location. But a project of that size and price point does help meet a need for (housing options) and helps release pressure of price appreciation for residential properties in Southwest Washington.”

Standing near excavators sled-deep in dirt, while crews wrap the site with orange silt fencing, he said he’s envisioning a place where young people can secure their first home. He rattles off built-in perks such as air conditioning, granite counters and “nice front porches.”

“It will look really nice when you drive through,” he said.

Selling less expensive houses should make the profit margins a little slimmer, but Ginn isn’t worried. When asked if it will be profitable, he said it’s easier to sell at that price because they are building so many.

“It will be (profitable), yeah, because of the number of units involved,” he said. Still, they are at the mercy of the housing market like everyone else, he noted. 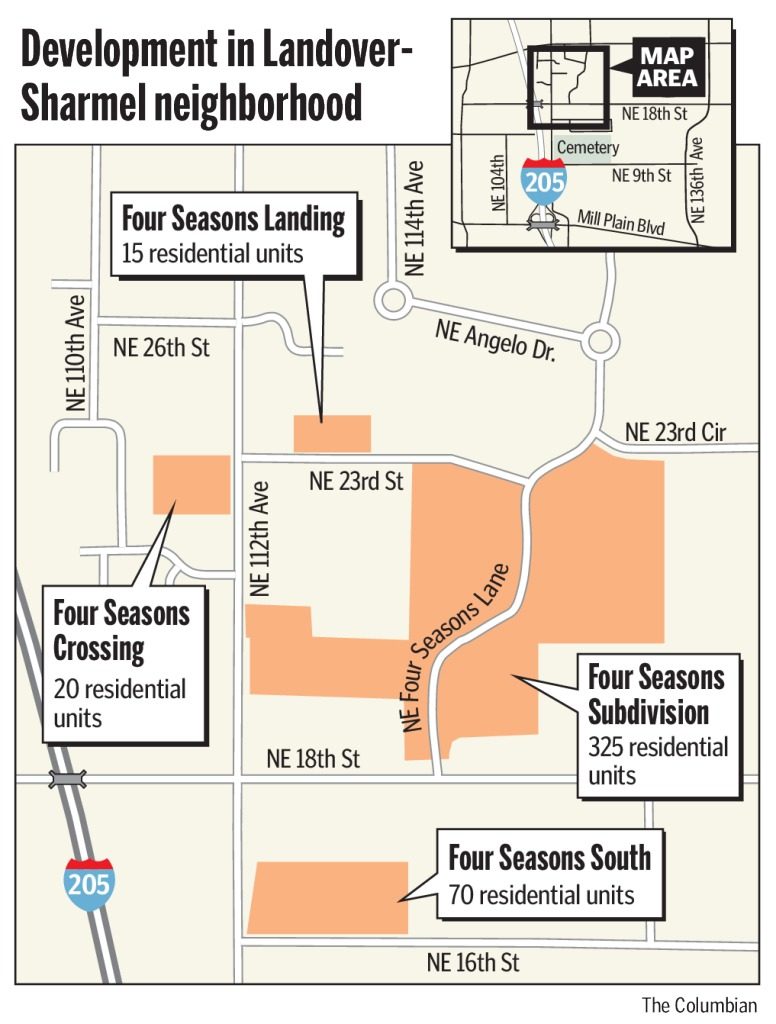 Rise of the area

This battery of single-family housing will change the look of the Four Seasons development, which itself has changed the look and feel of the Landover-Sharmel neighborhood over the past two decades.

Before The Al Angelo Co. began developing the land in the late 1990s, it was 100 acres of farmland. By the early 2000s, the Vancouver developer had erected 10 apartment blocks, a 124-unit retirement center and an area of brick commercial space, anchored by Safeway.

By 2008, the site had gained hundreds of new apartments, a new park and Endeavour Elementary School.

The new wave of growth is aided by recent capital construction to ease the drive into the area. Transportation projects from the state and the city helped pay for a new Interstate 205 interchange at Northeast 18th Street, which was also improved.

That new infrastructure is part of what makes the site attractive for this project. Craig Angelo, of Al Angelo Co., said the influx of people mixed with the businesses result in a win-win.

“Safeway likes having residential next door, it complements their grocery. And all those satellite tenants feed off that Safeway,” he said. “The more residential you put with commercial services, they feed off each other.”

No development is without growing pains, however. Endeavour is already capped for enrollment, according to Evergreen Public Schools spokeswoman Gail Spolar, meaning the young families that Ginn is targeting will need to know that their children might have to be bused to another school.

Still, many say building homes for younger families is a smart move. Eric Golemo, whose company SGA Engineering has handled much of the land use engineering, said that although the profits are slimmer, there seems to be pent-up demand for the single-family houses.

“The cost to build a home under $300,000 is tight, the margins are very slim, but there’s not much in this price range anywhere right now,” he said. “You don’t make as much on each one, but you don’t sit them on the market very much. Most of the builders have had to move out of that (price) because they need large margins.”

Read the full article sourced from the Columbian. Written by Troy Brynelson, Photos by Amanda Cowan.